I had a fantastic shoot this week shooting at the amazing Biscuit Factory in Leith. Below you can see the music video produced for the Simons Says Dance Academy. Shot on the Ursa Mini 4K it really came into its own on this shoot. For any of your music video needs in Edinburgh and Scotland just get in touch. 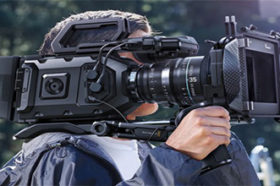 DSLRs are great.  The difference they made to the filming process has been huge over the last 5-10 years.  We still use one regularly on shoots but felt the need for a dedicated ...

I’ve just picked up my latest camera, the new Sony FX3.  Looks like I’m all Sony now.  I’ll be using this camera predominately alongside my a7iii. The FX3 featu...

Did you know it’s not just video content we produce over here at Session2.   With my background in Architecture it goes hand in hand that I shoot a lot of property photogra...